Over the past months and weeks, West Tennessee has fallen nearly one foot behind in annual rain fall.  A consequence has been very low river levels on the Hatchie and other local streams.  In order to do another stream clean up, the "Friends of the Hatchie" have been holding vigil on the river stage website http://www.srh.noaa.gov/lmrfc/?n=westtennesseeriverbasins.  On this link, we watch the "Rialto" gage.  A stage of 5.0 feet is considered a safe water level to conduct a group clean up event.  For most of this spring readings have consistently been much too low for a safe group event.

However, a recent storm front came through the Scenic Hatchie River watershed causing a spike on the gage.  This created a very narrow five day opportunity to conduct our third clean up event.  The event, announced on June 5, was held this past Saturday June 9, 2012.

This very short notice had a negative effect on our participation.  However, our third "Friends of the Hatchie" Scenic River clean up was still a success.  Four participants and two boats collected approximately five hundred pounds of garbage on a seven mile section of the river.  All of the garbage collected has been recycled through the Haywood County recycling program.

In a first for the "Friends of the Hatchie", an award was offered for the most unusual item removed from the river during the clean up.  The two part award consists of a battered duck decoy riddled by steel shot and a one year subscription to the Tennessee Conservationist  magazine http://www.tn.gov/environment/tn_consv/.  Pictured below, Dr. Tom Barton of Covington, displays a floating chase lounge chair designed for use in swimming pools, recovered from a submerged tree top in the middle of the river.  How did it get into the river?  We may never know, but we suspect alcohol may have been involved.

The Friends of the Hatchie wishes to thank the Tennessee Scenic Rivers Association http://www.paddletsra.org/ for its continuing and outstanding support.  The work of "Friends of the Hatchie" clean up events is also made possible by funding from the Tennessee Wildlilfe Resources Agency, who's support has proven to be solid, reliable and unwaivering.

Other agencies contributing to "Friends of the Hatchie" conservation work include the assistance of Mrs. Ruth Wallace and the "Keep Tipton County Beautiful Commission", the City of Covington Public Works Department and city of Covington Mayor Dr. David Gordon.  Our "green" conservation efforts have been made possible through support of Haywood County Mayor Franklin Smith and Solid Waste director Clinton Neal. 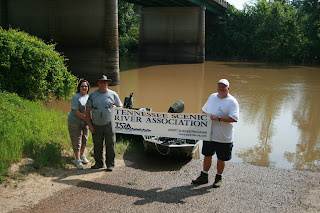 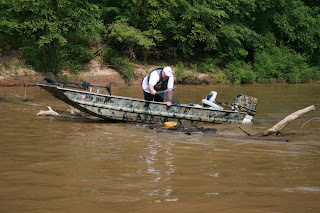 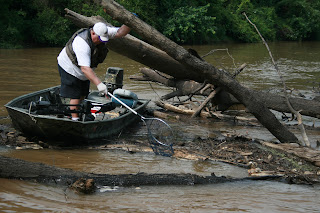 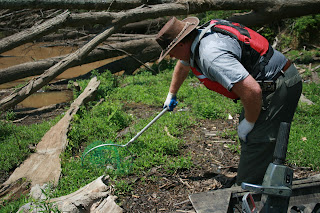 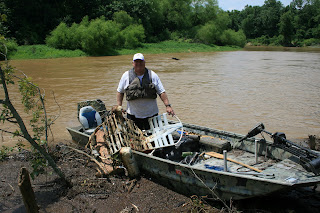 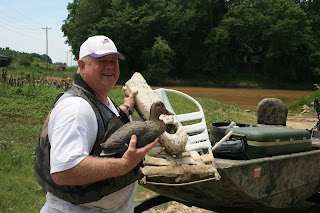 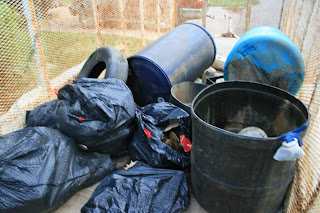 Until the next post, get out there on the river!
Posted by Conner Franklin at 5:11 PM No comments:

Are we there yet?

We arrived at the Highway 76 bridge at 2:15 pm Sunday afternoon February 19, 2012. The trip from Highway 18 in Bolivar to Highway 76 in Brownsville is 51.8 miles by river. There are precisely 1.75 bazillion bends on this stretch of the river. The average moving speed for the trip was 3.5 miles per hour. The elevation dropped 38 feet in 52 miles. We spent three full days and two nights on the river. In those three days we saw 2 people and probably 15 - 20 deer, a turkey a dozen otters and hundreds of ducks.

We got on the river about 9:50 am after the rain stopped. We never did get rained on. Thanks to the abandoned cabin, we spent a very wet night high and dry. This third day turned out to be sunny and mild. This was a great trip. I was proud to share the trip with my friend Billy Wilson of Somerville Tennessee. This is an activity that should only be done by experienced outdoor enthusiasts. Billy is a great partner on the river.

Thank you God, for allowing us to enjoy your creation and get home safe. Strengthen us to continue our work to care for your gift of nature.

See you on the river!
Posted by Conner Franklin at 10:44 AM No comments:

We have traveled 36.9 miles since yesterday morning. There has been no rain, cloudy but perfect weather. We found an old abandoned cabin and will spend the night in the dry on the porch overlooking the river.

We happened upon three deer swimming in the river, 2 does and a fawn. We slipped within 40 feet of them as they climbed out on the bank. Just as they were climbing out they jumped a mallard drake. That was a scene of a lifetime.
Posted by Conner Franklin at 3:47 PM 1 comment:

Hauled out for lunch

Hauled out below Hatchie Station for lunch. No rain. Fine weather conditions. Total trip is 27.0 miles. All is well.
Posted by Conner Franklin at 11:25 AM No comments:

We hauled out at an abandoned cabin 10.1 miles down stream from Bolivar for lunch. I'm stretched out in a patch of broom straw soaking up the sun. Life is
really good when you take the time to live it.
Posted by Conner Franklin at 11:13 AM 1 comment:

Several of us are taking a three day trip this weekend. We will be beginning our trip at Highway 18 in Bolivar Friday morning February 17, 2012. Our goal is to travel to Highway 76 in Brownsville by Sunday night. I'll be posting as we proceed.
Posted by Conner Franklin at 4:35 AM No comments:

Conner Franklin
Covington, Tennessee, United States
I have a BS Degree in Natural Resource Management from the University of Tennessee coupled with a 25 year career of professional environmental work. As a Certified Naturalist in Tennessee, my outdoor intrests rise from my farmimg and agricultural background. I have spent my career working for and with local groups, Local, State and Federal agencies, land owners and developers across three states promoting a philosophy of Conservation. Tennessee's Scenic Hatchie River simply holds a great place in my imagination.